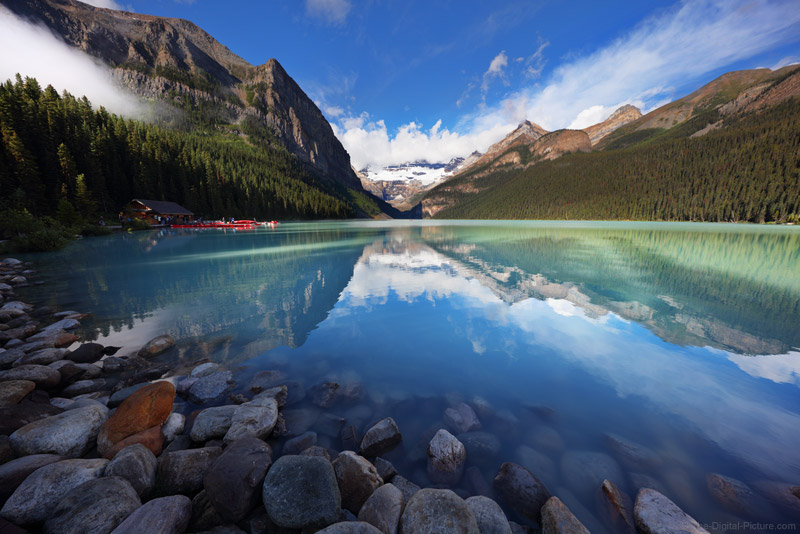 Lake Louise, referred to as the "Jewel of Banff National Park" is high on most of the park visitors' must-see lists. Fortunately, for many at least, is that it is easily accessible including large parking lots just a short walk away. Unfortunately, it is so popular that these lots fill up early and the easy-to-access side of the lake becomes very crowded even early in the day.

Photographing this lake wasn't my highest priority, but I did want some decent photos of it. After spending the early morning at Moraine Lake, I headed over to Lake Louise at roughly 8:30 AM. While there were plenty of people here already, the crowd was considerably thinner than later times of the day (the icy boardwalk also helped thin the summer crowd). The crowd was thin enough that I was able to capture a clear view of the foreground rocks and the glacier-fed lake still looked like glass (prior to the lake filling with canoes and the wind picking up). The beautiful mountains reflected where the lake was shaded and a glowing turquoise color showed where the lake was directly illuminated by the sun.

While I captured a variety of images, I found the round rocks at the edge of the lake to make a nice foreground and selected a red-toned rock as the standout. Once again, the 11mm field of view proved very useful.

Note that this is an HDR image.