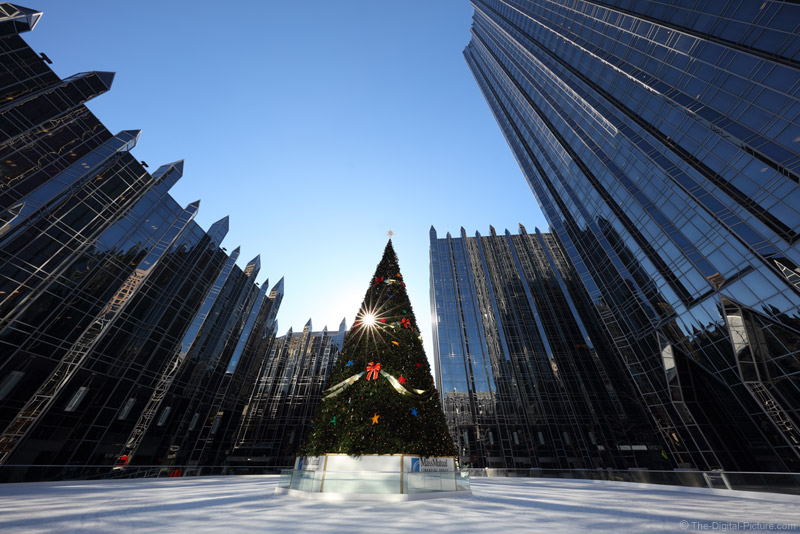 They don't take Christmas decorations down on December 26th, but ... the crowds will be lighter than before Christmas. Public Christmas displays, including large Christmas trees frequently found in towns and cities, make great photography subjects. Photographing these displays after the crowds leave can make life easier for the photographer (and your social schedule will likely be cleared). Though the Christmas anticipation feelings may have subsided, the resulting photographs can be as good or better than those captured before the holiday.

When do they take down public Christmas decorations? That answer varies greatly, but on this particular year, the large Christmas tree on display at PPG Place in Pittsburgh was scheduled to be taken down on Jan 26th. Part of my pre-trip planning involved asking that question. On January 5th, a very cold Tuesday afternoon, the crowds at the ice skating rink were light, but ... timing the photograph with the ice being cleared for the Zamboni to do its resurfacing work meant a completely empty rink.

To add an extra element to the image, I aligned the sun with a small hole in the Christmas tree and used a narrow aperture to create a strong starburst effect.

Setting the Canon EF 11-24mm f/4L USM Lens to 11mm will take in a VERY wide angle of view. Pointing 11mm upward will cause buildings to strongly lean inward.