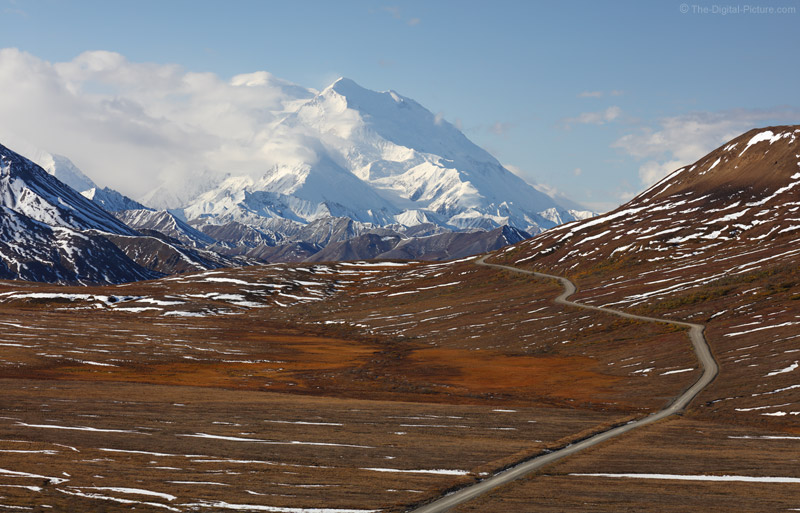 You are looking at one of the first pictures ever taken of "Denali", the highest mountain peak in North America. While that statement is fun to say (and true in a sense), a tremendous number of photographs have been taken of this mountain long prior to my arrival. However, the mountain's name was "Mt McKinley" from June 1896 until about just before I arrived. On August 28, 2015, Sally Jewell, US Secretary of the Interior, announced that the mountain would be renamed "Denali" (Wikipedia). Two weeks later, my opportunity to photograph this mountain came.

With an elevation of 20,310' (6,190.5 m), the peak of Denali can be seen be seen from at least 125 miles away – on a clear day. The last part of that sentence is a key one. Getting close to this mountain (for most) requires a shuttle/tour bus ride deep into Denali National Park's 92 mile mostly-stone road. Even those making the effort to get deep into the park stand only a 30% chance of seeing this mountain's peaks due to the clouds that frequently engulf it.

I spent a large amount of time planning and traveling to get to the location for this image and was blessed with a beautiful day for my long-in-advance-scheduled tour (after a morning snowstorm, the sky even cleared enough on my backup day to make the peaks visible once again). With the weather cooperating, taking the actual photograph was easy part.

I selected a manual exposure that would make the sunlit snow at the top of the mountains nearly pure white (barely blinking in the camera LCD) while using an f/8 aperture (for ideal sharpness and depth of field) and ISO 100 (for noise-free images). The resulting shutter speed of 1/160 was adequate for resting the awesome combination of the Canon EOS 5Ds R and the Canon EF 100-400mm f/4.5-5.6L IS II USM Lens on my backpack. With the ideal exposure locked in, I was free to quickly capture a variety of compositions of this incredible view during the 15 minute shuttle bus stop, with all being ideally exposed.

In the end, I merged two images to add a couple of hundred pixels to the right and left sides of the base images, giving the side-to-side balance that looked right to me.

I usually have a circular polarizer filter mounted when I'm photographing landscapes and usually note this use in the notes below relevant image posts. But, I want to make special mention of CPL use here because of the significant difference it made in the deep saturation and contrast of the foreground of this image. Like no other, this filter can add WOW! to your images.