A Call from my Wife and the Dandelion Field 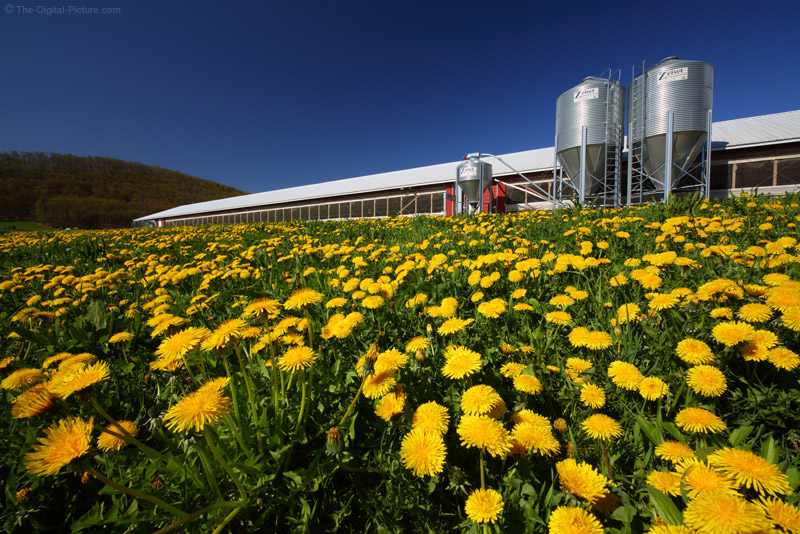 I always appreciate photo subject and location scouting help and my family looks out for me in this regard. It was early-mid morning and I was sitting in my office when the phone rang. As you guessed from the title, it was my wife. "The neighbor's field is full of yellow dandelions in full bloom. The light is perfect."

My wife has a good eye for beauty (she married me, didn't she? OK, OK, just kidding). I knew that the field she was talking about was indeed full of these yellow flowers and I had already considered photographing them. The part of the report that I was most questioning was the perfect light part. It was well after the golden hour and the sky did not look hazy enough to remain warm and/or soft this late in the morning.

The big question was, "Did I want to carve out an hour+ of my day for this shoot?" Keeping the scouts happy always has merit, the blooms were not going to last for long and a circular polarizer filter can take care of the high sun issue, so I loaded a couple of lenses and a 5D III into a Think Tank Photo StreetWalker Backpack and drove a couple of miles to the field.

My goal was to create an attractive photo highlighting the massive quantity of yellow dandelions, so the lenses I took were of the wide angle variety. Upon walking up to the field, I realized that looking downward revealed a much lower flower density than I wanted to see and dirt showed between many of the green plants in this hay field. Looking at the field from a low vantage point (from near or far) showed the bed of bright yellow flowers perspective I was looking for.

The chicken barn was not going to be avoided being included in the frame with the wide angle lenses I had with me, so I embraced it. Much of the very long barn was featureless, but taking a position close to the feed bins allowed the bins to become a prominent feature of the barn.

With the sun still relatively low in the sky, the CPOL filter needed a specific angle into the scene to work its magic.

The final composition involved finding the best-available foreground flower clumps relatively close to the grain bins, getting down close to ground and shooting in the angle providing the best CPOL filter effect. While I often avoid getting much of a clear sky in the frame, I felt that the bright polarized blue gradient sky color was attractive and added balance to this overall composition.

Down low and up close to the foreground flowers meant that an f/16 depth of field was not quite enough to give me sharp details in the closest foreground subjects, so I shot a second frame with those subjects in better focus. The two frames were stacked in Photoshop layers and the not-sharp-enough foreground details were erased from the top layer to allow the sharper second layer to show through.

What I didn't remember from childhood is that the yellow readily comes off of dandelion flowers. Upon getting into the car, I realized that my pants were very yellow. They were still yellow after blowing them off with an air compressor and they were still somewhat yellow after their first washing. All photos have a cost, but some have unforeseen costs.

In the end, I was glad my wife called and the collection of images I captured on this morning were worth the costs.