An Orchestra of Light – Ode to the Strobist 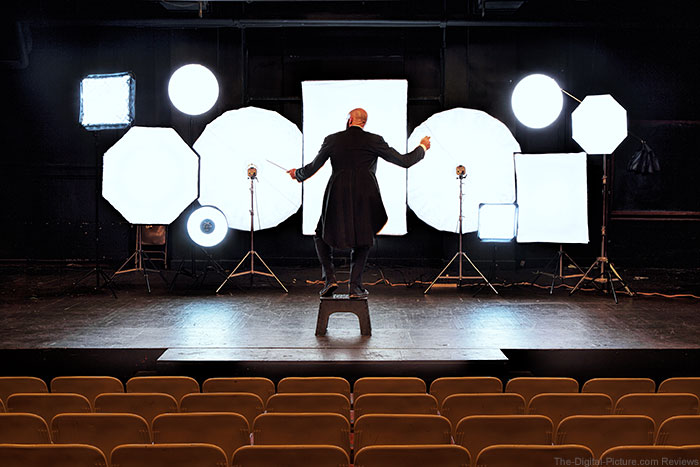 A few days ago I wrote an article about the importance of self-portraits. Today, I'm going to tell you about a self-portrait years in the making...

I can still remember when my coworker, fellow photographer and friend James Evins first mentioned the Strobist blog to me in late 2007. He suggested that I start looking into off-camera flash and said that David Hobby's Strobist blog was the best resource to learn how.

After a couple of months of digging through Hobby's Lighting 101 and monitoring the discussion threads on the Strobist Flickr Group, I bought my first off-camera flash gear – a Vivitar 285HV and a set of Cactus V2s triggers.

I became fascinated by the entire process of lighting. Where should the light(s) be positioned? Which modifier(s) should I use? What power level(s) should the flash(es) be set to? Should I gel the flash(es) for color correction or simply for the sake of creativity?

As the years flew by, I collected more lighting gear and refined the techniques I used to express my own photographic vision. Most of my lighting gear was purchased used on eBay to reduce the investment required to fill out my kit.

The popularity of David Hobby's blog led to the rise of an industry – lighting modifiers, inexpensive radio triggers and tools designed specifically for off-camera [shoe-mount] flash use. His impact on the industry is, in my opinion, immeasurable.

Almost three years ago I had an idea – to use all of my lighting equipment in a self-portrait dedicated to David Hobby, a man who had influenced my photography more than any other. It would also be a way to demonstrate to my local client base why my portraiture differed from those natural-light shooters around me. I plotted a rough lighting setup on my white board and left it there.

The lighting setup diagram stayed on my white board for almost a year before I had to erase it to use the space for something else. But the idea stuck. It was burned into the back of my mind. All I needed to do was find an appropriate location that I could use for several hours while completing the rather arduous setup and shooting. I planned on shooting the image in three sections (left, middle, right) because I didn't have enough light stands to hold every modifier I owned. I would then combine the exposures in post.

Almost two more years went by before I found a suitable location – the Backdoor Playhouse at Tennessee Technological University – and made the right connections to gain access to it. I was granted an entire evening with the venue.

When setting up for the shoot, I realized that the stage was smaller than I had anticipated. That meant I couldn't reasonably fit all the equipment that I actually owned on the stage. So I made a game-time decision to limit my lighting setup to the number of lights that I could trigger at one time. The ultimate limitation was the number of monolights and flashes that I brought – 7 monolights and 5 shoe-mount flashes. One of the shoe-mount flashes was used in the back to trigger various lights via optical slaves.

Below is a timelapse video of the whole shoot. I used a tripod mounted Canon EOS 7D + Sigma 35mm f/1.4 DG HSM Art set to capture images every 13 seconds. The 4-hour shoot is nicely condensed into 50 seconds.

Here's a list of the gear I used to create the image:

All in all, I'm happy with how the image turned out. While I did leave some gear on the table (several umbrellas, gridded strip boxes, another beauty dish, etc), I think the image serves its purpose – to honor the man that inspired me light the world in front of my camera.

You can find the full-resolution image here.