When DSLR Controller first came out on Android, it was the very first app on any mobile platform able to take full control of a DSLR using USB. Last year, it was the first to add the capability to use two phones or tablets, connecting one to the Canon EOS and using the other to control the rig over Wi-Fi. Early this year, it was also the first to add the capability to connect to WFT boxes and Wi-Fi equipped Canon EOS models using the full remote protocol (not the more limited smartphone protocol).

Now, it's time to announce the DSLR Controller Wi-Fi Stick. This combination of cheap off-the-shelf components (that you can also use for other purposes) and a customized version of the DSLR Controller software, adds a Wi-Fi module to any compatible Canon EOS camera. Easily the most requested feature, this extension allows you to fully control the camera over Wi-Fi using the DSLR Controller app on your Android device, the same as if it were connected over USB!

This build-it-yourself solution made up of an Android TV stick (CX-919), a power bank (USB battery) of choice and the DSLR Controller Wi-Fi Stick software, can be created for close to 100 USD. Another industry first for full remote control, beating most of the competition by 200 to 400 USD - wouldn't you rather put that money toward some more glass?

For the complete walkthrough, which components to get, where to get the software, and how to set it all up and use it, read our guide in the how-to section.

In short, everything worked as described. I loaded DSLR Controller on my Google Nexus 7 (original) and then installed DSLR Controller Wi-Fi Stick onto a rooted Rikomagic MK802 III Dual Core Android Mini PC I had lying around. I was able to control my Canon 7D (connected to the Rikomagic stick) via my Nexus 7.

When using my home Wi-Fi, the connection was fairly solid and the live view pushed to my Nexus 7 had a decent refresh rate. When using the Rikomagic to broadcast its own Wi-Fi network, the connection was a little buggy and the refresh rate was fairly slow. I realized the Android stick was lying close to the ground and probably affecting its performance. Once I hung the device from my tripod's center post hook (the thing you hang weight from to make your tripod more stable), my connection was much better. However, the refresh rate on live view still wasn't fast enough for smooth video, but it worked.

Here's a sample shot I created this morning: 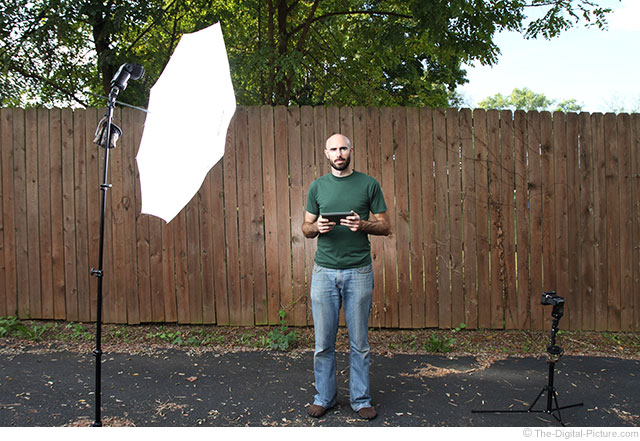 For the sample picture above, I used the following gear and apps:

I'm not 100% sure I'd depend on this setup if I only had one opportunity to get a shot. However, it does work - and it's probably the cheapest way to control your DSLR via Wi-Fi (if it isn't already built in, that is). And if nothing else, it's a great way to take pictures of skittish backyard wildlife! :-)