Airplane Over Harvest Moon at 1680mm 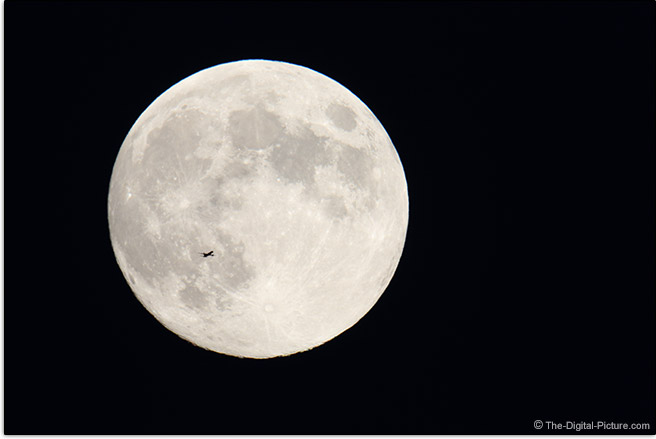 I decided that, with a clear sky, I was going to stack a pair of extenders to the back of my Canon EF 600mm f/4L IS II USM Lens and capture the "Harvest Moon" (the full moon closest to the autumnal equinox).

While you should not expect amazing image quality from this setup, the tight angle of view delivered by 1680mm is quite amazing. So tight that tracking the moon through the frame is a constant task. And, avoiding vibrations is a challenge. I opted to use mirror lockup with the 10 second self-timer to make sure that the camera fully settled down before the shutter release.

I was trying different exposure settings and verifying the results on the LCD. During one such check, I saw a black spot on the moon. My first thought was that I had a piece of dust on my sensor. Zooming in revealed otherwise.

I live well over an hour from the nearest large airport. The sky was black and I had no idea that there were any airplanes in the area. Using the 10 second timer, with the narrow angle of view, meant that I was predicting where the moon would be in the frame at shutter release. Not only did the airplane happen to cross the moon at the exact time of the shutter release, it happened to be in a perfect location over the moon. The timing was divine.

This image is an un-touched and uncropped (but reduced in size of course) conversion of the Canon EOS 5D Mark III RAW file. Photography is so fun.
Posted: 9/20/2013 9:34:16 AM CT   Posted By: Bryan
Posted to: Canon News, Nikon News, Sony News    Category: Camera Gear Review News

Previous Post:
For Discussion: What is the one question about photography that you would like an answer to?
Next Post:
Weekend Recap for September 15 - 21, 2013
comments powered by Disqus