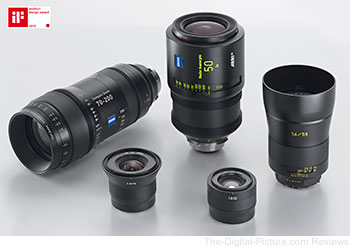 OBERKOCHEN/Germany, 25.02.2013. - Carl Zeiss has won five product design prizes as part of the prestigious iF design awards 2013. Three ZEISS camera lenses and two cine lenses were presented with an award during a festive ceremony on February 22 in Munich. More than 3,000 products were submitted for the iF product design award 2013, which is now in its 60th year.

The winners are the cine lenses Compact Zoom CZ.2 70-200/T2.9, the ARRI/ZEISS Master Anamorphic MA 50/T1.9 (which was developed jointly with camera maker ARRI), as well as three new camera lenses for single-lens reflex (SLR) and mirrorless system cameras (CSC). One of the lenses for Sony NEX and Fujifilm X cameras even received the coveted iF gold award for particularly exceptional design, which this year was presented to only 50 of the 981 winners. This new product family of autofocus lenses for mirrorless system cameras (CSC) should be available starting the summer of 2013.

The iF product design award pays tribute to an entirely new design approach at Carl Zeiss. "For the first time, we have established a design language that aims to convey the strengths and the identity of our lenses already through their appearance, how they feel to the human touch, and the impression they create," says Martin Dominicus, Head of Marketing of Carl Zeiss Camera Lens Division. The new product design language, which will be applied to all future lenses, was created in close cooperation with the Stuttgart design studio Phoenix Design. "While ZEISS lenses have until now mainly been known for their technical precision, excellent image performance and ergonomics, our lenses will now also meet the highest aesthetic standards of our customers by becoming design objects in and of themselves," explains Dominicus. "Important in this respect are not only functional aspects such as convenient handling and operation, but also the effect that is communicated through high-quality design."

Carl Zeiss and Phoenix Design, which was founded in 1987, developed the new design language in an extensive two-year process that began with in-depth interviews with experienced users and business partners. Tom Schönherr, co-founder and partner of Phoenix Design, explains: "From the brand values of ZEISS lenses we derived product characteristics for the areas usability, perception and technology which should be mirrored in the product design. Attributes such as logical, reliable and user-oriented are reflected in the new concept for labeling and manageability." The industry designers have described the characteristics in a guideline. These characteristics will distinguish the ZEISS brand in all future products and ensure recognition across all product lines. Brand recognition will be reflected in such form elements as contour lines, the look and feel of the operating areas, and the properties of the surface. New features include an optimized focus ring, a smooth coating, and a stray light lens hood which presents itself as an optical component part of the camera lens. The lens hood's funnel-shaped form signals the high speed and performance which ZEISS lenses are known for, among others.

The names and scales on the lenses are — fully in line with a uniform and recognizable typography — in the standardized typeface DIN 1451. This typeface is not only known for its clear, classic and modern appearance; used since 1936 for German road and rail signage, it is intended to be quickly recognizable and optimally legible, even in poor lighting conditions. These are characteristics to which photographers and cinematographers also attach great importance as they make it easier to handle a lens.

"Being honored with the iF product design awards confirms that we have succeeded in creating a distinctive design. Especially for a lens, this is a major challenge as the scope to influence the design is very limited. With few but all the more typical elements, we have developed a new and modern design language that is already gaining acceptance," says product designer Schönherr.

Dominicus adds: "For us it was important that the appearance of ZEISS lenses be just as unique as their technical characteristics. We have developed a concept that enables Carl Zeiss to achieve its premium claim more consistently in the future: uncompromising technology with outstanding product design."