Should I Get the Canon EOS R5, EOS R6, or EOS R? An Extensive Comparison 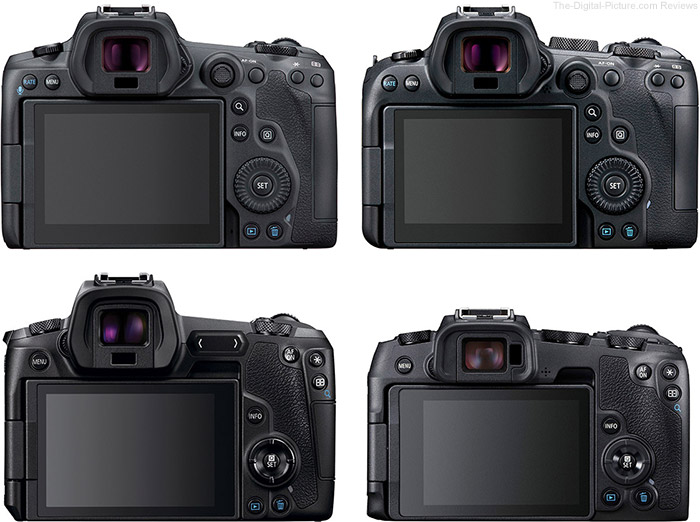 Should I Get the Canon EOS R5, EOS R6, or EOS R? An Extensive Comparison The Canon EOS R, shown at the bottom-left in the lead image, came first. The R was Canon's first full-frame MILC (Mirrorless Interchangeable Lens Camera), and the start of the R-series. This model offered a relatively high resolution with a good feature set and solid performance at a reasonable price.

The Canon EOS RP, shown at the bottom-right, came next. A tiny model, the RP is positioned below the R and has a modestly lower resolution and noticeably lower price. The RP is an exceptional value.

This page exists because of the two models that came next, the Canon EOS R5 and Canon EOS R6, respectively shown at the top-left and top-right. These are both exceptionally-high-performing cameras positioned (and priced) above the EOS R.

Here are the differences between the Canon EOS R6, R5, and R. 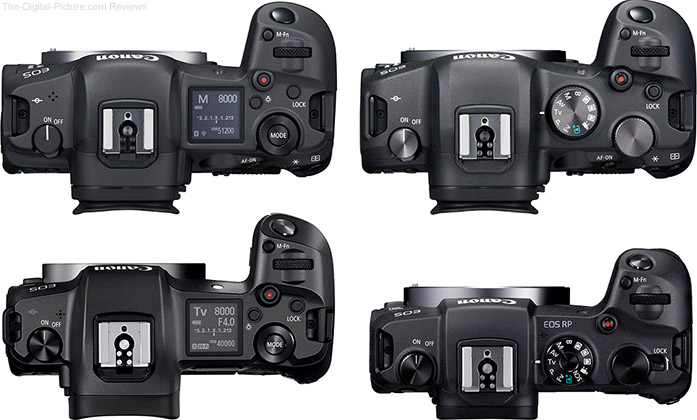 Again, the original EOS R is a great value, offering good performance and relatively high resolution for a modest price. The 2-years-newer R5 and R6 are significantly more advanced cameras and considerably faster in a number of regards.

One clear differentiator between these cameras is the resolution they provide. It takes no more effort to press the shutter release on a 45 MP camera than it does on a 20 MP camera, and all things equal, the higher resolution image is more desirable. Use the additional resolution to output large, to downsample to even higher quality, or to crop with potentially high resolution remaining.

Not as apparent in the chart are that the R5 and R6 image sensors are significantly faster with less rolling shutter effect, and improved dynamic range (exposure latitude). Here are some dynamic range comparisons:

The R6's larger pixel sites have a higher SNR (Signal to Noise Ratio), meaning less noise at the pixel level. However, for the comparison to be equal, the higher resolution images must be downsized to the R6 image's pixel dimensions, and with that action, oversampling advantages are realized. At equivalent final image sizes, the R5 and R6 noise levels are about the same.

The pixel-level noise performance is often reflected in the available ISO settings. The R6 has this advantage, and the R trails the R5. That said, you don't want to use any of these cameras (or those from any other manufacturer) at the highest ISO settings made available.

Another aspect that specs do not make clear is the relative sharpness of the images these cameras produce. The R produces softer images than many other Canon cameras when the images are processed using the same settings. Why? I've asked that question multiple times and have received no answers. However, that question has been resolved in the R5 and R6.

The R images sharpen nicely with a higher sharpness setting ("2" looks nice). Are the R's RAW images de-tuned slightly, providing more latitude for the photographer to dial in the result they want? Does the R have a stronger low pass filter? Or, is there some other cause for the softer results?

The advantage of "DIGIC X" is not as easy to comprehend as, say, the number of megapixels on the imaging sensor, but this processor's extreme speed makes complex in-camera calculations possible, with improved AF performance and image quality being two advantages. The DIGIC X processor in the R5 and R6 is significantly more powerful than the DIGIC 8 processor in the R.

The R6 does not feature Canon Dual Pixel RAW capture where two signals are captured for each pixel. Portrait Relighting is featured on the R5.

The IBIS (In Body Image Stabilization) is a tremendous advantage held by the R5 and R6 models. These two cameras effectively upgrade all of the lenses in your kit, with better image quality being realized. IBIS is a huge advantage for video, decreasing the need for bulky and expensive gimbals in certain situations. With IBIS, the R5 and R6 have a noticeable rattle when powered off (don't worry about this).

The R5's 8K uncropped video capability (including RAW) is awesome, and the R6 enjoys a strong movie capability advantage over the R, including uncropped 4K vs. cropped 4K (1.75x). The R5 and R6 provide Dual Pixel CMOS AF II tracking with every resolution/framerate, but the R does not get AF tracking with high framerate (720p) capture. An R5 advantage is that it goes to 120 fps in 4K while the R6 has FHD 120 fps.

The R6 has only two movie modes, and the R5 has an improved movie setting menu option.

All three of these cameras can autofocus in crazy-low light levels, but the R6 has a slight advantage. The R5 and R6 have some advantage over the R when focusing in very bright light levels.

The R5 and R6 have a focus bracketing feature missing on the R (this feature first arrived on the RP).

Also aiding in capturing a perfect action shot is the R5 and R6's extremely fast frame rates, rates that leave the R far behind.

For some, having dual memory card slots is a big advantage for the R5 and R6 over the R. Differentiating between the R5 and R6 is that one of the R5's slots is the faster CFexpress format. For those not needing the speed of CFexpress, the R6's dual card slots sharing the same UHS-II SD format could be an advantage.

The additional controls and buttons, including a joystick replacing the R's Multi-Function Bar and ISO adjustment instantly available on the top quick control dial, along with the revised power switch design on the R5 and R6 make these cameras easier to use than the R. The EOS R and R5 have top LCDs while the R6 does not. The R5 and R6's top-right three buttons on the back have a horizontal layout to provide space for the larger dual memory card slot door — especially the AF-ON button is easier to reach in the updated layout. The R5 and R6 have an additional configurable button (depth of field preview by default) on the front. If you need the sound memo feature or a PC terminal, the R5 is your only choice.

While the R5 and R6 arrive with a higher capacity battery, that battery is compatible with the EOS R and its charger, meaning this difference is easy to equalize. That 14% higher capacity battery helps the battery life ratings with the R5 and R6 showing big improvements (when using the LCD). Remember that experienced battery life is often twice the rated value, and far higher when capturing high-speed bursts of images. These three cameras are essentially the same size and weight.

The EOS R5 and R6 have an enhanced grip geometry, featuring a larger shelf above the fingers and a thicker grip base, both making the newer models noticeably easier to hold onto.

For a significant percentage of photographers, the primary decision factor between these cameras will be the price. A safe recommendation is to buy the highest-priced model you can afford. The EOS R is a bargain. The EOS R6 is a considerably faster and better camera, and the EOS R5 is the flagship model, unsurpassed in the Canon lineup. If your funds can take you to this level, the R5 is the camera you want.

Simplifying the R5 vs. R6 comparison:

R6 Advantages Over the R5

The R6 advantages list is a short one, and most advantages are very slight. However, the "Lower Price" bullet is a powerful one.

Did I miss any differences? Let me know! That the R5 has a "BE CAREFUL HOT" warning label inside the memory card door does not count. The R6 lock button being raised modestly might count a tiny amount.

Use the site's tools to create specific comparisons:

Not all differences show up in the specifications, but the visual comparison tool can fill in many of the missing differences:

Note that the R5 and R6 review pages continue to be updated with additional information.