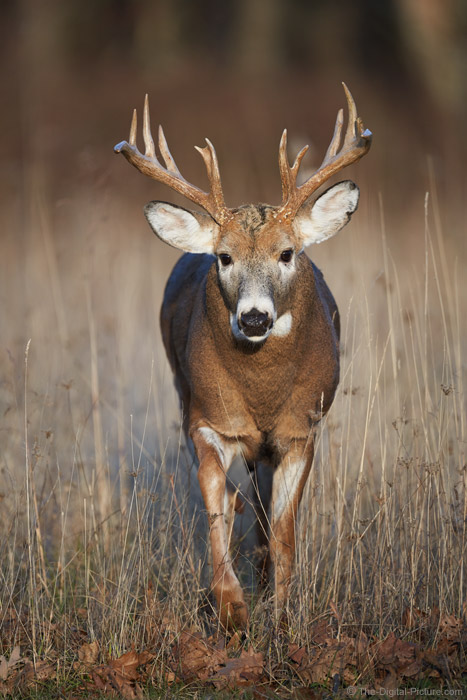 Using a new camera often brings acclimation factors and despite having used the Sony a7R IV for a couple of months prior, I was still acclimating to this camera's enormous 120MB uncompressed RAW file size. We were staying ahead of this big old 12-point buck and it finally cooperated perfectly, walking toward us with the sun was at our backs. While capturing images of him approaching, I was greeted by the memory card full message in the viewfinder.

I had filled a 256GB memory card just as the perfect scenario was unfolding. While another memory card was immediately available, the pause was just long enough to miss the pinnacle of the action. Ironically, the workshop participant shooting next to me filled his Nikon D850's 256GB card at almost the exact same second. While we missed some images, the humor of it is realized and that memory is at least of some value. The lesson here is to monitor card capacities closely — or buy cards with enough capacity to outlast any use given to the camera.

Fortunately I had some good pictures from this buck encounter. When the buck was farther away, I preferred a horizontal camera orientation, keeping more of the grass field in the frame. As the deer approached, the horizontal framing became too tight and switching to the vertical orientation shared here made complete sense for the vertically shaped subject.

The vertical vs. horizontal camera orientation is a choice we are always making. Sometimes the choice is easy and sometimes it is not.

One consideration is how the image is going to be used and which orientation is required for that use. If your goal is to get the image on a magazine cover, going vertical is a good choice. Another big consideration is the aesthetics of the scene. Some scenes look better in one of the orientations.

If the horizontal vs. vertical orientation choice does not have a straightforward answer, shoot both. It is often easier to decide when using a computer display and keeping images shot in both orientations may be the right choice.

While the Sony a7R IV's uncompressed RAW file size has required some acclimation, it has not been hard to acclimate to this camera's 61 MP resolution.