How to Photograph a Pregnancy Progression Series

Very soon after we learned that we'd be having a baby, Alexis asked me to create a series of images showing her progression over the next 9 months. She doesn't ask me to take pictures of her often, so I took her request very seriously. After she showed me some examples of pregnancy progression photos she liked from Pinterest (no doubt the inspiration for this request), we decided a plain white background and strong rim lighting combined with a dark outfit would work well for the concept.

For this particular series of images, I used 3 studio lights and 1 shoe-mount flash for the lighting. One monolight was in a 4 x 6' (1.2 x 1.8m) softbox that served as the background and the other two were camera left/camera right slightly behind the subject, diffused by gridded strip boxes. The fill light was provided by a Canon Speedlite 580EX flash that was reflected into a white umbrella and boomed above my Canon 5D Mark III & Sigma 50mm f/1.4 DG HSM Art Lens which was mounted on a tripod.

Unfortunately, I was not terribly organized at the beginning of this endeavor. I remember thinking, "This is a pretty simple setup. I can recreate it without any problems." That thought proved to be quite inaccurate. As my mind was quickly bombarded with an overwhelming amount of information on raising a newborn, it apparently left little room for the details of the lighting setup I was certain I'd remember. As such, I found myself analyzing the first month's image on the second month and taking test shots to ensure consistency. After that, I decided to document the entire setup to streamline future sessions in the series.

So, here are a few things to keep in mind when creating a similar pregnancy progression photo:

If recording all the measurements above seems a bit too tedious, you maybe be able to simply mark subject/lighting/camera placement with gaffer tape on the floor (assuming the tape won't need to be removed within the required time period) and/or taking pictures of the setup from several angles with your smartphone for referring back to.

From a business standpoint, a series like this would require 10 separate sessions, generating constant revenue for the photographer over the gestational period. With the all the details well documented after the first session, future sessions could be relatively quick and easy to set up and capture.

My wife loved the final image so much that we had a matted 12x36" version of it printed. It now hangs over the changing table in the nursery. 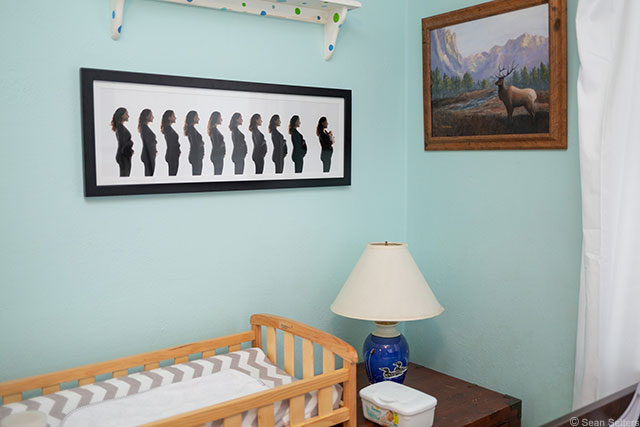 Of course, a pregnancy progression series requires a long term commitment to achieve optimal results, but I think you'll find the final image created well worth the effort.

A larger version of Alexis's Pregnancy Progression image can be seen on Flickr.