Find Out Where the Bumble Bee Went 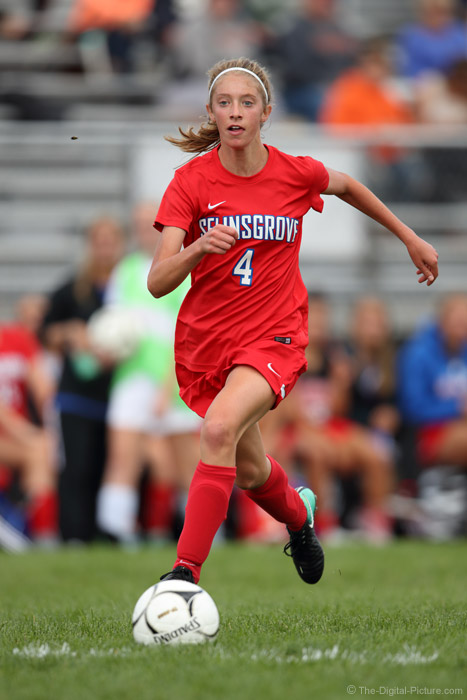 My site-related work consumes most of my time and I gave up trying to process all of my images long ago. After looking at all images and selecting down to my favorites, I just save all of the remaining RAW files and focus on processing my favorites and those that have other immediate value.

Recently, I carved out time to go through my youngest daughter's fall soccer pictures. I had decided to share one with you and had the selection narrowed down to 3 images (out of thousands).

Of the three images, two happened to be adjacent in a burst and one had an extra element of interest, a large bumble bee flying into the scene. Usually, I remove inadvertent insects from my sports photos. But, as I was editing the next image in that sequence, I noticed Mikayla's left cheek appeared differently colored/shaded and ... then I noticed the bee flying backward just below her ear. The bee had flown into her cheek, leaving an indentation and then bounced off. The 1D X II's fast frame rate caught that and I was amused. 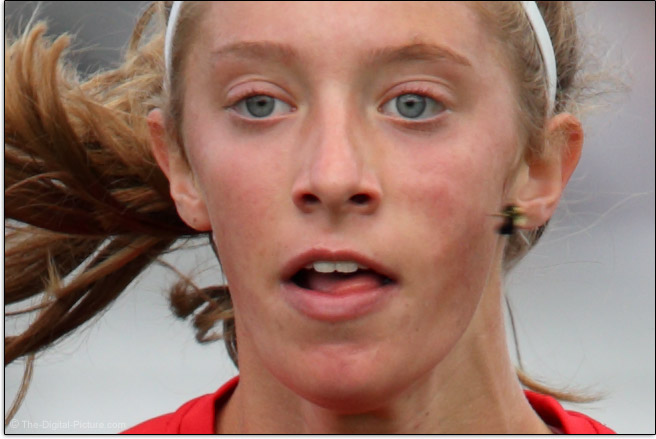 Here are some of the qualities I like about this image:

Both the ball and the player's eyes are in the frame and the eyes are in sharp focus. That the entire player's body is within the frame is also often-desired. With the original image framed somewhat loosely, cropping allowed optimal composition.

Desirable is that the player's body position is open toward the camera and all limbs are visible (an arm or portion thereof did not go missing behind the body for example). All limbs stretched out indicates fast action – as do both feet off of the ground. If the athlete has long hair, the position of that hair can add to an image.

A positive is that the background is both strongly-blurred and very colorful. What is in the background can often be determined by your position on the sideline. While there are a lot of bad backgrounds at sporting events, the team's bench will often provide some color for you. Also, your height above the field makes a difference with the background pushing farther away when a low position is used (and the athlete appears large). The strong blur seen here is courtesy of the Canon EOS-1D X Mark II and Canon EF 600mm f/4L IS II USM Lens combination.

For a sporting event, the lighting seen here is excellent. The photographer cannot choose game time and mid-afternoon, with a high-in-the-sky sun, can have terrible lighting. If the sun is bright, there will be hard shadows in the frame and especially under a clear sky, heat waves can spell disaster for image sharpness. If the sky is cloudy or the sun has set, dark conditions require a high ISO setting which means lots of noise. On this afternoon, the conditions were perfect. There were just enough clouds to diffuse the light, but not enough to require a high ISO setting. The non-directional lighting meant that I could set up optimally for both the background and for the expected direction of the game play.

With this share, I wrap up my fall 2017 soccer season. And, Mikayla is safe from the bees for a few months.