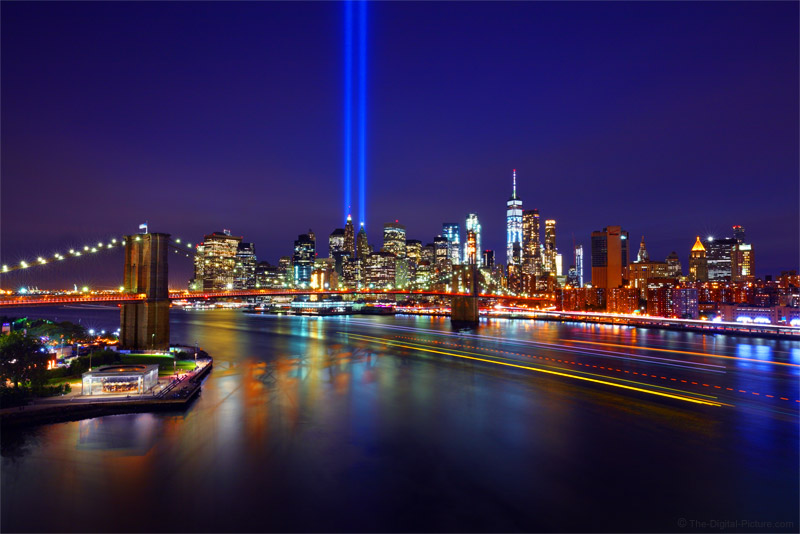 I spent some time researching the optimal destination for my daytrip to New York City with photographing the 9/11 Tribute in Light as the primary goal. While the lights can be seen from anywhere with a view over the city, I was looking for something especially nice. I decided that the perspective from the Manhattan Bridge, as shared here, was the ultimate one for a variety of reasons.

The first is that I would have an elevated view on the city. This means the river would fill a larger portion of the frame (all things equal, water surface area fills more of the frame as the camera gets higher). Because the tribute lights need to go straight up through the frame, the camera needed to be level for both pitch and yaw. While a tilt-shift lens could have solved this issue, shooting from a higher elevation permits a higher framing of the scene.

What can be seen from this location was another reason for selecting it. Starting on the left side, Jane's Carousel is always an attractive element to have in a NYC frame. It is also hard to go wrong with the Brooklyn Bridge, One World Trade Center and the rest of the South Manhattan skyline, any of which individually make great subjects. Even the Statue of Liberty can be seen through the bridge cables on the left side. I didn't plan on the American flag being prominently featured on top of the bridge, but it is very fitting to have it in this scene.

The Manhattan bridge span is a very long one and that meant the position on the bridge needed to be selected. Because bridges move when traffic crosses them, I like to photograph over the piers where the amount of movement is minimalized. Using online maps, I verified that there was a walking area for crossing the bridge and I could see the location of the piers. I also determined that one of the bridge piers provided alignment of the tribute lights so that each was behind the pointed top of a skyscraper. That same pier appeared to also provide the best perspective of the city overall.

The plan was to arrive at Brooklyn Bridge Park (seen in the left side of this image) early enough in the afternoon to scout the primary shooting location and to find secondary locations for later use. I walked the park down to the end of Pier 1, back up to beyond the Manhattan Bridge and then proceeded up onto the bridge. The online maps clearly showed a walkway across the bridge and that was indeed present. But what I couldn't see was the high fence that bordered the entire walkway, from one end to the other. I was disappointed, but it was early and I went forward with my scouting plan on the bridge.

As I moved farther out onto the bridge span, I realized another significant problem, one that I thought was a show-stopper. This bridge had a very significant amount of vibration and when I arrived to the pre-selected pier, I discovered that this location was not insulated from that significant movement. However, I also discovered that someone had cut small holes in the fence at two places at this pier. While the holes gave me the view I needed, I didn't think there was a chance of getting a sharp long exposure image after dark.

I decided to walk the rest of the bridge span into the city. I found one more hole in the fence over the pier on the Manhattan-side of the East River, but the vibrations were no better at this location and the view from the first pier was as I wanted. I decided to head for solid ground, but upon arriving at the preferred bridge pier, I decided to attempt a long exposure image through the hole.

I set up a camera and lens and installed a 10-stop neutral density filter with a circular polarizer filter to simulate darkness. I was shocked to find that 30 second images were rather sharp. I was timing the image captures between the (very loud) subway trains passing and the long duration of the exposures were allowing the vibrations to equalize out of the final result.

As I was mentally finalizing my plans to come back for sunset and blue hour photos, another photographer arrived and began setting up at the other hole in the fence. It was only about 4:00 in the afternoon and sunset was not until 7:11 PM. But ... if other photographers were arriving already, I decided I need to stay the duration to retain my optimal shooting location.

The other person was very friendly, additional photographers began showing up and the time passed quickly. While waiting, I determined that a very-carefully placed camera and medium-sized lens without a hood could *just* fit between the about-4" diamond-shaped metal crossbars at the bottom of the fence and I was able to deploy a second camera and tripod I had along.

The 90-second image shared here was captured just after 8:00 PM with the shutter being opened just after the ferry entered the frame, creating a long streak of colorful lights.

This is a single-frame capture with the Brooklyn Bridge Park area being brightened slightly. The blue channel was boosted for a cool look and saturation was increased to bring out the colors.

Check out the 9/11 Tribute in Lights Reflection with One World Trade Center for more of this day's adventure.