The Winter Solstace is Rapidly Approaching – Get Your Star Lens On! 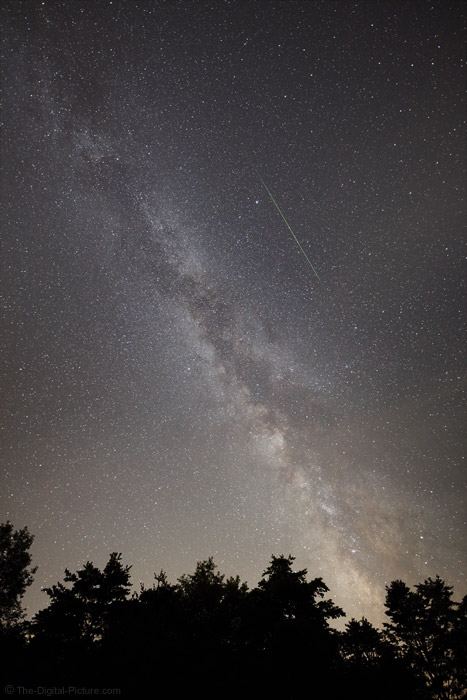 Here in the Northern Hemisphere, the winter solstice is rapidly approaching and the days are already short. That means nights are long and, while plenty of indoor photography avails itself at any time of the year, late fall and winter is a great time to photograph the night sky for a few reasons.

First, there is more dark time of the day and that means more hours of star visibility. You can spend hours photographing the night sky and still get to bed in time to be well-rested in the AM. When the nights are long, the biting bugs are gone (depending on where you live, the potentially-biting bears may also be gone). One more reason is that, because cold air is not able to hold as much moisture as warm air, winter tends to have clearer skies, and clear skies are of course a prerequisite for star photography.

Winter astrophotography is not without downsides and these include less-comfortable temperatures along with a Milky Way alignment that may or may not work well for you. Of course, a bright moon can preclude dark skies at any time of the year.

The Milky Way (or any photo of the stars) can make a nice image, but a meteorite is a huge bonus. How do you increase the odds of getting the perfectly-positioned meteorite in the frame? Photographing during a meteor shower is ideal. However, meteorites can happen at any time and a formally-designated "shower" is not a requirement. A big key is to take a lot of photos, significantly increasing the odds of a well-placed shooting star streak.

Night sky exposures are long, especially with long exposure noise reduction enabled, and that means taking many photos takes a lot of time. Time-consuming tasks that can be left unattended beg for multitasking. Set up the camera (on a tripod of course) with the desired manual exposure settings dialed in and set the drive mode to high speed burst. Then, using a remote release featuring a shutter release lock, lock the release down and go do something else.

If you are fortunate enough to have great stars in your backyard (and you are not concerned about the camera being stolen), that something else could be anything indoors including eating dinner. Or, set up a second camera to photograph the night sky with, perhaps using a different foreground and/or focal length. Read a book, call your mom, sleep, etc. You get the point – and you get the pictures.

If long exposure noise reduction is turned off, the set of images captured can later be combined to create a star trails photo (these are especially great if including the North star). Also optional with the same set of images is creating a time-lapse sequence with the stars moving across the sky.

For this image, I used the suggested strategy and spent my time working with another camera I had also set up. Every 5 minutes or so, I came back to adjust the composition (keeping the bottom of the Milky Way aligned with the break in the trees). Upon reviewing the images later, I found one with the ideal meteorite streak position (along with four smaller meteorite streaks visible in the full-resolution image).

I should mention here that even with a 14mm lens, cameras with imaging sensors having pixel densities as high as the Canon EOS 5Ds R (and all 20+ MP APS-C models) begin to show small star motion-blur streaks at the 25 second exposure used here (except those stars closer to the North Star and the southern equivalent). One option to extend exposure times while avoiding star streaks is to use an equatorial tracking mount. However, a tracking mount will just cause the foreground to be blurred (if a foreground is included in the frame). A great feature of the Sky-Watcher Star Adventurer tracking mount is the 1/2-speed rotation setting option, permitting the motion blur to be balanced between the earth-bound subject and the celestial ones. This setting effectively doubles the exposure times that can be used or, alternatively, it facilitates a 1-stop lower ISO setting. The Star Adventurer likely costs less than you think. Start with the "Astro Package" and consider adding the EQ base and counterweight.

Multiple times I've started to assemble a list of the best star photography lenses, but ... that project remains unfinished. That is a really hard list to assemble and there are no perfect astrophotography lenses. However, there are several really good choices and I currently consider the Sigma 14mm f/1.8 DG HSM Art Lens to be the best astrophotography lens available today. I have a dark sky photo trip planned for next summer and the Sigma 14 Art is the primary Lens I plan to take for that purpose.

What is your favorite astrophotography lens?