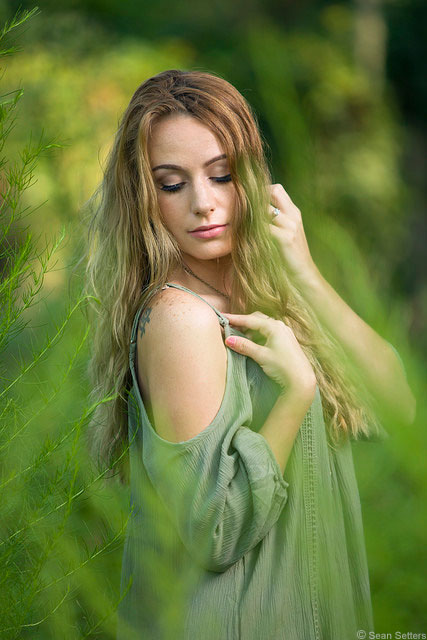 Not long ago I was walking down a street near my home when an abandoned, overgrown lot grabbed my attention. While the lot wasn't what I would call "scenic" with its fallen branches and litter, the tall weeds in the middle of the lot intrigued me. A short time later I was contacted by a model wanting some images to add to her portfolio and I she liked my suggestion of using an overgrown lot for our backdrop.

As I mentioned, the vacant lot on the whole did not look very good. As such, I decided to use two techniques to minimize the impact of the shooting location and draw focus to the tall weeds which I really liked: a long focal length and a wide aperture.

I had originally planned on using the Canon EF 85mm f/1.2L II USM, a very wide (f/1.2 - f/1.8) aperture and a 4-stop neutral density filter (to allow me to achieve a shutter speed below the 5D III's max flash sync speed) for the shoot. Unfortunately, I had temporarily misplaced my 4-stop ND filter. Without a 4-stop ND filter at hand, I decided to use the EF 70-200mm f/2.8L IS USM (predecessor to version II) paired with a 2-stop ND filter instead.

My inability to find the 4-stop ND filter actually turned out to be a blessing in disguise. The 85L II has a field of view (FOV) of roughly 28° while the 70-200L IS has a FOV of 12° at 200mm. The smaller field of view meant that I could capture a smaller slice of the background in each frame. And when coupled with a wide f/2.8 aperture (with background elements a decent distance from my subject), the background became a creamy blur of color which didn't include recognizable [distracting] elements. Another benefit of the 70-200mm lens in this particular case was an increased working distance (with similar framing) that allowed me more opportunities to capture blurred foreground elements as well.

For lighting I used a radio triggered, battery-pack powered White Lightning x3200 monolight reflected into a 60" white parabolic umbrella perched atop a C-stand.

Here's another image captured during the session: 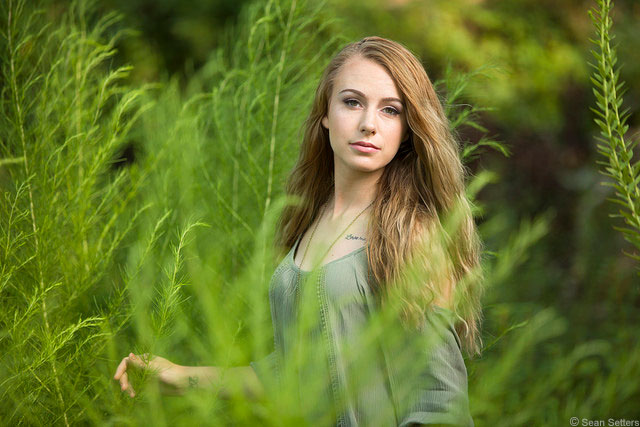 So the next time you're facing a portrait session with an uninspiring background, just grab your wide aperture telephoto lens and kiss the background goodbye!
Posted: 9/19/2016 10:19:01 AM CT   Posted By: Sean
Posted to: Canon News, Nikon News, Sony News    Category: Photo Tips and Stories