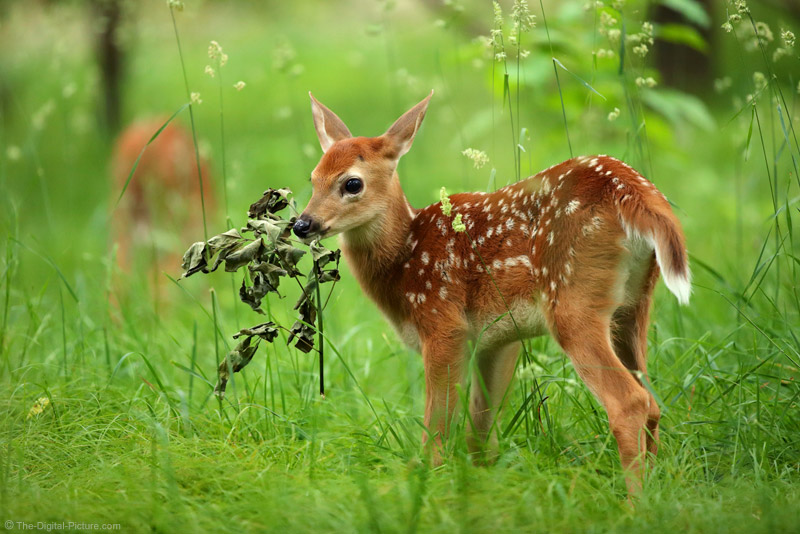 The Canon EOS-1D X Mark II is an amazing camera, but I continue to use the Canon EOS 5Ds R a considerable percentage of the time. The primary benefit of the 5Ds R is its incredibly high resolution. Lighter weight, especially without the battery grip installed, is another advantage.

When planning my fawn photography trip to Big Meadows in Shenandoah National Park, I expected the higher resolution to be my preference and packed a pair of 5Ds R bodies along with many spare batteries. I also packed the 1D X Mark II, with expectations for this camera being more for additional in-the-field experience in support of the currently published review.

The Big Meadows meadow is thick with vegetation. Thick patches of thigh-high briars are found throughout and grass covers much of the balance of the meadow area. The grass is not exceptionally thick, but it sends stems and seed heads up rather high and there are few openings void of the tall grass.

While somewhat attractive, these seed heads create problem. The fawns are short – shorter than the grasses. While the fawn may be easily visible, a very high percentage of my fawn photos include a grass across an eye or blocking enough of the fawn's face to detract significantly from the image. With the sun at my back, the ideal lighting for wildlife photography, the grasses created shadows directly on the fawns and the shadows were just as detracting as the grasses themselves, creating double trouble. With careful timing, images could be captured when the fawn passes between the grasses. That is if the fawn was moving slowly and if the wind wasn't blowing.

The problem was that the fawns were seldom still or moving slowly and the grasses move in even the lightest wind, making accurate timing nearly impossible and even challenging with the fawn standing still. Compounding the problem was that grasses close to the camera were not so visible in the viewfinder, but they still contributed to a noticeable contrast reduction in the image. There are a lot of things to concentrate on when photographing a randomly moving animal (focus point selection to mention one) without having to keep track of blowing grasses and their shadows. Shooting from a higher position than ideal (ideal being level with the subject) was often helpful in getting above some of the grasses, but ... the 1D X Mark II's fast frame rate delivered a much greater number of keeper images than the 5Ds R was capturing.

Capturing images at 14 fps, there was often the right combination of body and grass positions in at least one of the frames from a burst. Or, subsequent frames captured so quickly could potentially allow portions of one image to be composited with the other, such as for removing an offending blade of grass.

I'm not sure if this fawn was playing or experimenting with a new food, but it was adorable for sure. I held the shutter release down for the short period of time it was holding the branch in its mouth. While I captured well over a dozen images, only one image gave me a clear view of the fawn's head.

Grass was my #1 nemesis in Big Meadows and was responsible for the delete button being pressed on thousands of images, but the 1D X II ensured that there were plenty of great shots remaining in the keeper folder.

Overall, the success of my three days in Shenandoah National Park was largely due to the 1D X II's capabilities. Even when the grass interfered visually, I was impressed at how adept the Canon EOS-1D X Mark II was at focusing on the fawn. Foreground obstructions are notorious for grabbing AF's attention, but very frequently the 1D X II figured out that the fawn was the real subject and remained locked onto it.

A larger version of this image is available on Flickr, Google+, Facebook and 500px. If reading from a news feed reader, click through to see the framed image. If you find these tips useful, please share them in your circle of friends!