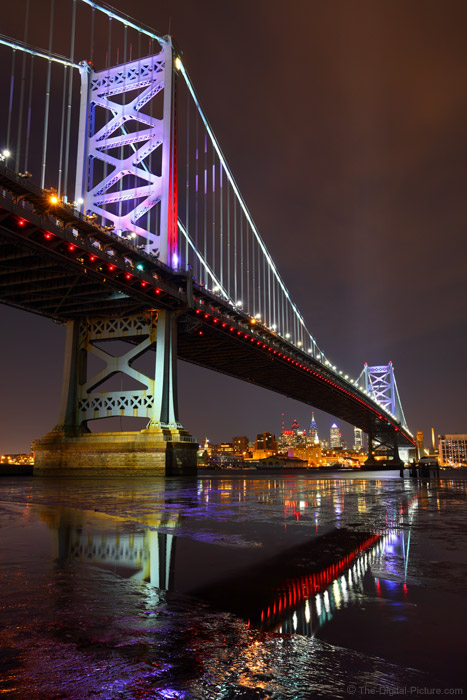 The Ben Franklin Bridge in Philadelphia, PA has been on my to-photograph list for a long time and earlier this year, I was technically able to check this attraction off of my list (I decided to keep it on the list for images from a different angle).

Having not been to this location before (aside from driving across the bridge), I needed some daylight time to scout for the evening's photos. I knew the basics of the area based on my research, but onsite finalization of the plan is usually needed. Even though very far from the bay and roughly 90mi (150km) from the Atlantic Ocean, this location on the Delaware River is tidal. I knew that there was a tide and that the tide would be going out during my shooting time (incoming tides require more concern). What I didn't know was the significance of the water level change. My scouting determined that locations close to the early evening water appeared best and I had lots of flowing water in the foreground for the image I envisioned.

As prime time approached, I watched the water level rapidly decrease a significant amount until my side of the river became nearly empty. There was nothing I could do about the situation and I was not about to attempt walking out into the quicksand-like muck. As photographers must always be ready to do, I embraced what I had to work with. The good news is that, as the water level dropped far enough, I had wet mud and pools of water that nicely reflected the bridge and city, creating a look that I may like even better than the image I had visualized.

On a good day, Philadelphia is an over-3-hour drive for me. The ideal time of the day to photograph the city lights with at least a little color in the sky is only a small fraction of that time duration. Life is busy and when it comes to good images, more is rarely worse than less. If you are a professional photographer, you count on your images for your income. If your primary income is not generated by photography, you probably cannot spend as must time in the field as you wish. To maximize your image volume relative to effort expended, perhaps close to a doubling effect, run two complete camera setups.

If you read my Canon EOS 80D review, you saw an image showing one angle of the Ben Franklin bridge. With a very short period of time to capture images and each image taking approximately a minute to capture (a 15-30-second exposure followed immediately by a same-length long exposure noise reduction process), having at least a second complete camera and tripod setup nearly doubled my images for this evening. While the 80D and Canon EF-S 18-135mm IS USM came out of the MindShift Gear BackLight 26L later in the evening, I mostly used the 5Ds R and EF 24-70mm f/2.8L II on a Gitzo GT3542LS with an Arca-Swiss Z1, set up close to the bridge.

I very frequently utilize a pair of cameras when shooting landscapes and cityscapes before sunrise, after sunset or even when working with strong neutral density filters under bright sunlight. The process is simple. I find a unique composition for each camera. Upon finishing one camera's setup and triggering the shutter release, I run to the other camera (well, I sort-of ran and stumbled over the big rocks in this case) and did the same. By the time I return to the first camera, it is usually finished or nearly finished with its processing. I quickly evaluate the image captured, make any adjustments I feel are warranted and repeat the process.

If running two camera setups not immediately within reach, safety for the gear must be considered. I wouldn't call the area below the Camden, NJ side of the Ben Franklin Bridge the safest I've been in. It was dark, there were no other people around and I kept a very close eye on the second camera setup, watching for anyone sketchy approaching. Having the cameras setup this far apart gave me very different perspectives of the bridge and city vs. simply different framing of the same perspective. The 5Ds R would permit strong cropping to achieve a similar framing adjustment, so I wanted something completely different from the second camera.

With so many images that I like captured that evening, I struggled to pick out one to share (part of the problem of having perfectionist tendencies). Three months later, I forced myself to pick one. This was it. Hope you like it and hope even more that you can increase the number of great images that you capture.

A larger version of this image is available on Flickr, Google+, Facebook and 500px. If reading from a news feed reader, click through to see the framed image.