Turning Day Into Night with 2 Speedlites 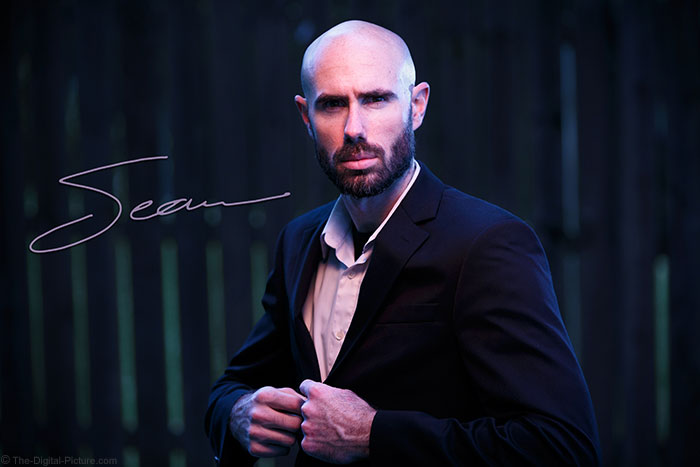 As usual, this self-portrait was created in order to answer a question I had rolling around in my head:

Is it possible to make an outdoor portrait taken in bright, sunny conditions appear to be taken at night? And with relatively limited gear (shoe-mount flashes)?

I knew that choosing the right location was key to producing the effect I wanted. It was about 1:30pm and the sun was high in the sky and very bright. Speedlites are not necessarily the best choice when overpowering the sun (especially when used with a light modifier). I chose a spot in my driveway that was completely shaded by an overhanging tree. The pointed the camera at a fence that borders my driveway which was also in shade. I set up a tripod mounted 5D Mark III with the versatile EF 70-200mm f/2.8L IS USM (forerunner to the version "II" model) attached and framed the shot. I used a 4-stop ND filter on the lens so that I could use a wide aperture to limit my depth-of-field (the fence behind me wasn't all that interesting) while staying below my flash max x-sync speed. Truth is, I could have easily gotten away with a 2-stop ND filter as I had to use ISO 400 with the 4-stop ND Filter in place. So why didn't I change out NDs having had a 2-stop ND filter inside the house? The answers – 1) laziness and 2) it simply didn't matter. The 5D III's performance meant that the difference between ISO 100 and ISO 400 was not significant enough to worry with, so leaving the 4-stop ND filter on the lens wasn't a problem (especially as the 5D III's autofocus is quite sensitive in low light).

The main light (Canon 580EX in Westcott Rapid Box Octa) was boomed overhead using an Avenger 40" Extension Arm mounted to a C-stand. The extension arm allowed me to position the light above me (slightly in front) without having the light stand in the way. I gelled it with two full CTO gels with the intent of shifting the color balance blue to simulate the cooler colors of nighttime.

I wanted the picture to have a dark, ominous look to it. The modified main light was positioned a little high to light my face while leaving my eyes in shadow (thanks to my pronounced brow ridge). Having the eyes in shadow added to the effect I was going for. Still, I was asking a lot of the shoe-mount flash. With two gels in place and a diffusion panel in front eating away at the flash's output, I had the flash set to full power and still could have used a bit more light (I upped the exposure a small amount in post).

I used a bare 580EX (ungelled) as a rim light (positioned behind me). I decided not to gel this flash so that it would produce a cool rim light that would contrast well with the still-slightly-warm main light. I think that flash was set to 1/32 power. Both flashes were fired via radio triggers.

To trigger the camera, I used a wireless RC-1 remote and simply pointed the tripod-mounted camera at my desired spot using the AF points to cover the area where my head would be. Then it was simply a matter of standing in the right spot (roughly middle of the frame) and pushing the RC-1's shutter release button.

Fun Fact: Conveying a specific image is often about the ideal framing. In this instance, you'd never know that I was wearing baggy, tan colored cargo pants with my button-up shirt and suit jacket. Because of the framing, I knew that changing into matching black dress pants (on this warm day) would be superfluous. ;-)
Posted: 6/4/2015 9:37:01 AM CT   Posted By: Sean
Posted to: Canon News, Nikon News, Sony News    Category: Photo Tips and Stories