How a $100.00 Accessory Helped Me Capture My Most Popular Image Ever Posted to Social Media 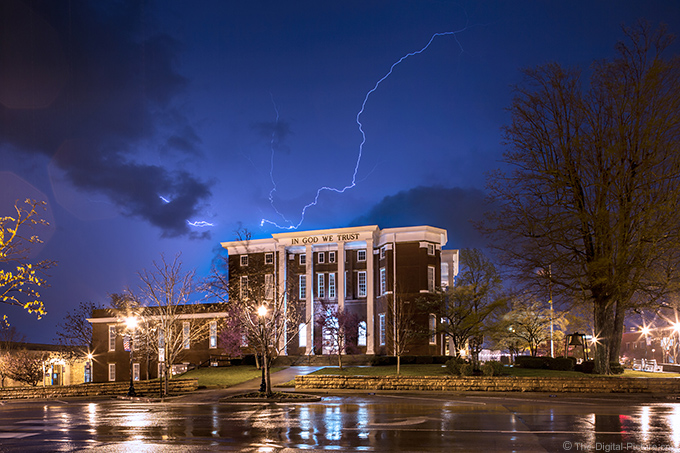 At about 3:30am this past Friday, I awoke from a sound sleep but had no idea why. Through the tiny slit in my eyelids I thought I detected a flash of light from the window behind my head. It didn't seem very bright and I thought to myself, "Was that lightning or am I dreaming?"

After waiting a few seconds to hear the tell-tale sounds of thunder, I laid my head back down. A few seconds later, though, I finally heard the faint sounds of distant thunder.

Wanting to try out my Vello FreeWave Stryker Lightning & Motion Trigger, I groggily rose from the bed, put on clothes and packed my camera gear. In 15 minutes I was standing on the town square after a very short drive.

I originally purchased the Vello FreeWave Stryker Lightning & Motion Trigger just before Christmas of last year. As winter is not known for producing thunder storms, I had only been able to use the device once a couple of weeks ago since acquring it. While testing the device for the first time, I thought about how cool it would be to capture lightning over one of my town's most famous landmarks, the historic county courthouse.

To get the shot, I positioned myself under the awning of a building across the street. I used my 5D Mark III and a Canon TS-E 24mm f/3.5L (precursor to the TS-E 24mm f/3.5L II) so that I could keep the perspective of the building clean while also capturing a good portion of the sky (shifting the lens upward).

I adjusted the Vello trigger's sensitivity to the point at which it was triggered by the ambient street lights and then backed off the sensitivity just slightly. It took me a few test shots to nail down my exposure settings (adjusting aperture and ISO to properly expose for the lightning and shutter speed to properly expose for the buildings), but I finally worked it out.

After about an hour and a half of shooting (well after getting this shot), I went home and immediately edited the image and posted it to Facebook where it blew up in popularity, easily besting any other image I've ever posted to social media. It was shared by the official Facebook page of our county (where it has garnered over 1,400 likes and almost 200 shares this weekend) as well as being shared on the Facebook pages of our town mayor and a local radio DJ.

Unfortunately, I was quite tired when originally editing and posting the image and didn't notice how warm I left the image's color balance. I cooled down the color balance (but still left it slightly warm) in the image uploaded to Flickr (shown above).

Could I have captured this image without the lightning trigger? Of course. To do so, I would have needed to continuously fire the camera in interval mode (either using an intervelometer or simply pushing the shutter button every time an exposure ended), but using the dedicated lightning trigger made the process much easier. The lightning trigger was also handy when trying to find the right exposure variables (as the camera wasn't continuously firing, camera settings could be adjusted as normal). Also, using the trigger meant that I didn't have to wade through hundreds of images to find the ones where lightning actually struck.

You can see a larger version of the image on Flickr.