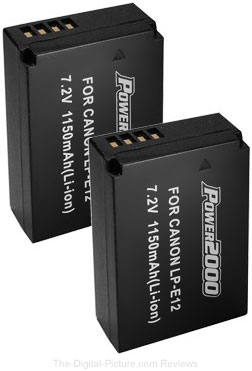 I've been using various third-party batteries alongside OEM (Original Equipment Manufacturer) ones in my DSLRs for years (first starting with the Rebel XTi). The price of third-party batteries make them attractive from a consumer's standpoint, but they often deliver lower performance compared to the OEM ones.

I decided to film a friend's band, Three Penny Nickel, at a local watering hole on Saturday. Up until then, all of their videos had been captured via cell phone by a fan in the audience. I thought I could do better and set out to try.

I packed my 5D III into a backpack with a few lenses, my EOS M (with 22mm STM) and a Zoom H2n. I brought along my 7D Mark II with EF-S 24mm f/2.8 STM mounted on a Glidecam HD-4000. My plan was to set up two stationary cameras (the 5D III and EOS M) on opposite sides of the band while capturing stabilized, moving video with the 7D II. I knew that a three camera setup was ideal so that when crossing the view of one camera I could always rely on the other stationary camera if the moving video wasn't to my satisfaction. I checked the battery levels in the DSLRs and they were just fine. I replaced the mostly-drained OEM battery in the EOS M with a fully-charged third-party battery that had been sitting on my desk for a time. Seeing that the camera registered the third party battery as full, I didn't pack another battery (big mistake). Then I headed for the venue.

I arrived a little early in order to set up my equipment. I propped up the 5D Mark III on a railing with the Sigma 35mm f/1.4 DG HSM Art lens attached and pointed at the band. The field of view was just about perfect for capturing the three front band members.

I set up the EOS M on the opposite railing and began adjusting the camera's settings. About 30 seconds after turning the camera on, the LCD went blank. Puzzled, I removed the battery and replaced it. Nothing. At the time I wasn't sure if the battery had simply failed or the camera had become inoperable for some reason. After returning home and replacing the third-party battery with a freshly-charged OEM one, identifying the culprit was easy. The camera powered right up as you'd expect with a freshly charged battery.

With only minutes before the band was to perform, it didn't matter if the camera had failed or the battery, the effect was the same (at least for the time being) – not having working battery (either primary or backup) meant that I only had two cameras available to me to complete filming. That fact proved quite limiting when cutting the video together the next day in Vegas Pro 13. An additional camera angle would have allowed for a more polished end result, especially considering the challenging shooting conditions.

It's true, I should have had a backup battery on hand for the event. However, considering all the drawbacks of third-party batteries – with overall reliability being one of them – I've decided to stick to OEM batteries going forward. And yes, anything can fail (even OEM products). But from my personal experience, I have much less to worry about from OEM products than I do from third-party ones. And that's especially true for batteries.