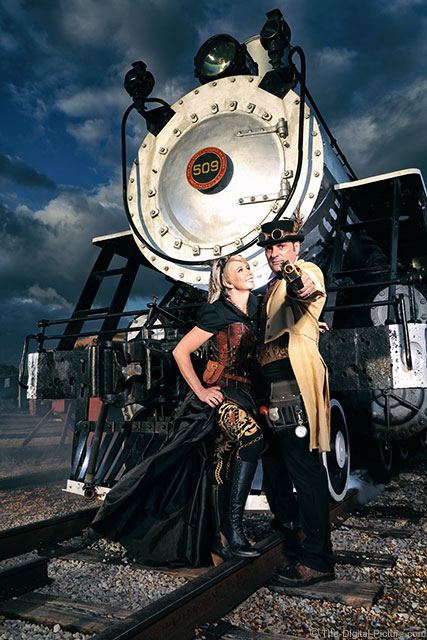 If you're you've never heard of "steampunk," check out Wikipedia for a good introduction to the science fiction sub-genre.

James and Amy had spent countless hours hand crafting or altering Victorian age clothing, accessories and props. They wanted their engagement photos to showcase their passion for the genre. And considering James is a fellow photographer, I really wanted to bring my A-game to this shoot.

We planned the shoot for the late afternoon. I arrived at the location about 30 minutes early to scout out the location, determine my shooting angles and set up my gear. This is an important step if you shoot with off-camera flash – arrive early. Setting up light stands, wireless triggers, light modifiers and power options is time consuming. Arriving early allows me to hit the ground running once your clients arrive fresh on the set.

While setting up I realized that it was hotter than I thought it would be when I planned the shoot. About 20 minutes into setup I was already sweating through my t-shirt. I knew James and Amy would be wearing multiple layers of clothing (they had sent me a preview of their outfits). If I was already hot, they were going to be much more uncomfortable than I was.

I decided to purchase a few cold bottles of water from a nearby food vendor so that my clients could stay hydrated throughout the shoot. It was a small – but certainly appreciated – touch.

One big challenge for the location was that the front of the train faced the setting sun. This meant that my subjects would be staring straight into the sun whenever they looked into the direction of the camera. This caused two problems: 1) the subjects would be squinting and 2) the direct sunlight would make them even hotter in their multiple layers of clothing.

To combat these issues, I set up large 64" umbrella behind the camera's position so that it shaded my subjects from the sun. The umbrella didn't shade them completely, but it allowed the subjects to pose comfortably while the sun was making its way over the horizon in front of them. The shade umbrella also had another benefit – it provided a blank canvas to work with as far as lighting is concerned. It converted the sun into an ambient base instead of limiting it for use as a main light. That means I could position my main light anywhere to sculpt the scene as I saw fit while simply adjusting my shooting variables to obtain the base exposure I wanted (soft, ambient fill light on my subjects).

In short, here are the three things I did to help keep my subjects comfortable on this shoot:

And those small things combined to keep my subjects happy on this shoot. Throughout the shoot, James and Amy stayed fresh, fun and full of ideas. And it really paid off in the end.

If you'd like more details on the lighting setup, check out my description below the picture on Flickr.