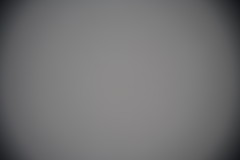 What Is Lens Vignetting (or Light Fall-off)?

As seen in the example picture above, vignetting (or light fall-off) is the effect caused by more light reaching the center of an image than reaching the edges. There are several types of vignetting ...

Mechanical or physical vignetting is caused by an physical obstruction preventing light within the lens' field of view from reaching the camera's image sensor. Mechanical vignetting is perhaps the easiest form of vignetting to understand. The physical obstruction can be caused by the lens barrel, a filter, lens hood (improperly designed or misaligned) - or anything else in the way - preventing light from reaching the lens. Try looking through your viewfinder and blocking the light from reaching the edge of your lens (you can use your hand). The effect of mechanical vignetting is typically a strong, dark circular darkening most apparent in the corners of an image and it goes away as the lens is stopped down (narrower aperture). This is the easiest form of vignetting to understand.

Pixel vignetting is yet another potential cause of image edge darkening. An image sensor is composed of millions of photon wells that measure/record the light hitting them. The photo wells, although extremely tiny, have a depth to them. Just as the late day sun does not hit the bottom of your trash can, light hitting the sensor at a strong angle may not hit the bottom of the photon wells. The strongest light angles will be found at the image edges. Reportedly, most manufacturers compensate for pixel vignetting in their sensor algorithms. Also, newer sensor designs may show decreased amounts of optical vignetting.

Not necessarily. In fact, lens engineers may purposefully incorporate vignetting to improve other attributes of a lens such as contrast and sharpness. And many photographers want vignetting in their images for effect - and may even add it during digital post-processing. The darker image border forces the viewer's eye toward the subject - and at times adds a desirable look to a picture. My strong preference is to not have any vignetting caused by my lenses as it is easy to add later in Photoshop - if I indeed want to add it. Of course, I want perfect sharpness, perfect contrast ... also. So alas, vignetting is often unavoidable. In these cases, Photoshop (or other similar program) can remove vignetting during post-processing.

Could Canon Design Lenses With No Vignetting?

Yes. At least they could create lenses with very minor vignetting. However, none of us would want to carry them as they would be much larger and heavier. Or, they might have very narrow apertures - in which case you can simply stop down the lens you have.

If you have a full understanding of your lenses, you will be better positioned to use them most effectively. Understand when you are trading depth of field (narrow aperture) for shutter speed, background blur - and vignetting.